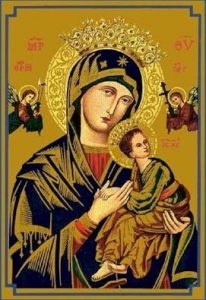 Prayer to Our Lady of Perpetual Help

Mother of Perpetual Help, your very name inspires confidence. We come before your holy picture in praise and thanksgiving to God, seeking your intercession with Jesus, your son, for all the needs of our lives today. We celebrate your holy motherhood as we proclaim Jesus Christ our Lord and Redeemer. You answered when called to be mother of our Lord. Obtain for us the grace to be alive to our baptismal call and especially to embrace the Gospel of life and to respect all life on earth. You wondered as your Son grew in wisdom, knowledge, and grace. Intercede for us so that we may welcome the Word of God in our lives and be bearers of the good news to everyone. You delighted as your Son healed the sick. Intercede for our sick that they may receive good health and that they in their turn may be healers to others. You enjoyed peace as your Son comforted the afflicted. Intercede for all who suffer so that they may know that we carry their burdens with them and in this way we keep the law of Christ. You rejoiced as your Son forgave sins. Obtain for us the forgiveness of our sins and lead us to unbind others and set them free. You suffered at the wounds your Son endured for our salvation. Help us to bind up the broken-hearted and to give hope to the downtrodden. You exulted in your Son’s resurrection. Obtain for us the grace to persevere in His way all the days of our life and be granted a place in heaven. You are the first of all the disciples and saints. We trust in your motherly love and care. Obtain for us all the graces we need to fulfill God’s plan each day in our lives. Amen.

BLOG
Articles, news and posts about our parish life and the Catholic Faith. SERVANT LEADERSHIP
All our parish ministries, including Pastoral Council, Religious Ed, Social Concerns, Ministry of Mercy, Pro-life, Finance Council and many more. BECOMING CATHOLIC
Information on RCIA the Rite of Christian Initiation of Adults and the RCIA Process. 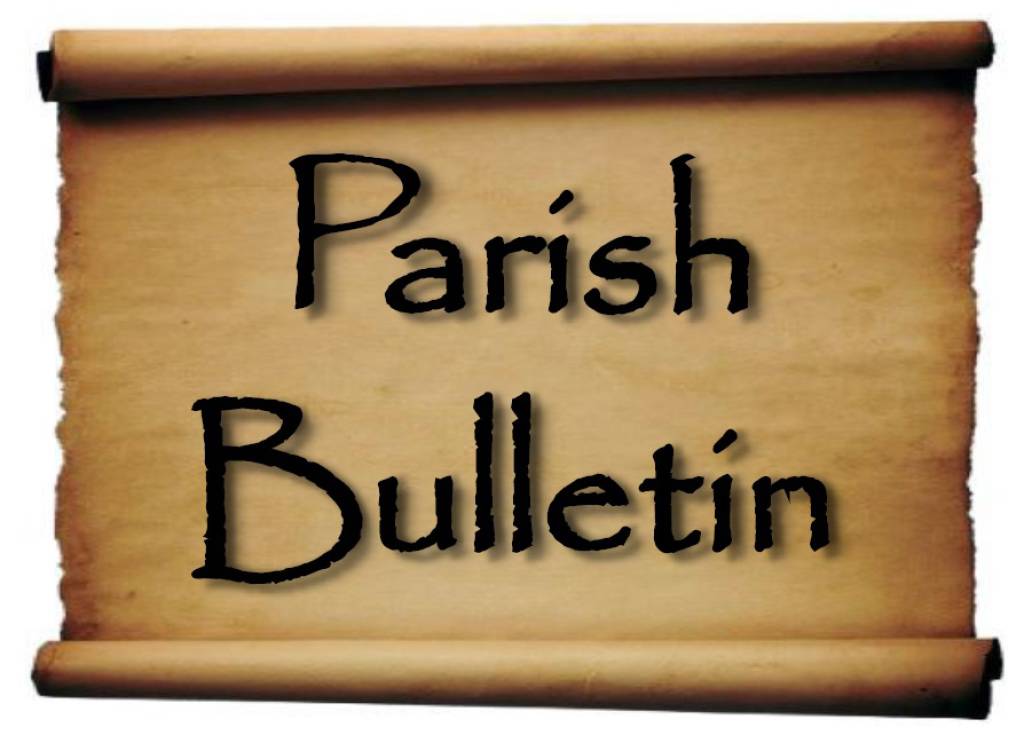 We bring together a new parish family
to worship God, to evangelize the
community, to encourage participation
of youth and young adults in parish life,
to pass on our faith to the next
generation, to respect life,
and be good stewards of God’s gifts.

HISTORY OF ST. MARY OF THE ASSUMPTION CHURCH.

The actual founding of St. Mary’s Parish began in 1950 when Fr. McCabe was appointed administrator of St. Anthony of Padua Church in Stowell with a

mission at St. Francis Church in Cummiskey. He was commissioned by Bishop Hafey to form a mission parish in Wyalusing with the name of the new parish being St. Mary of the Assumption, in honor of the dogma newly proclaimed by Pope Pius XI1 in Rome. Prior to 1950 Catholic families were served by a priest coming to Wyalusing where Mass was celebrated in private homes.

Sunday Mass was first celebrated in the Wyalusing Theater. The James Andrew’s home on Route 6 was purchased as a new base for the parish community. Mass was offered in the parlor of the home which also served as a residence for the pastor. St. Anthony of Padua in Stowell was made a mission with St. Mary of the Assumption. St. Francis Church in Cummiskey then became a mission with St. Basil’s in Dushore. At this time, the rectory would be moved to Wyalusing. Mass was held in the parlor of the Route 6 home for the next 3 years. An addition was built onto the rectory to accommodate a larger congregation. In 1953 a hall was acquired from St. Francis Church in Cummiskey. It was cut in sections and brought to Wyalusing. Parishioners and local contractors put up the hall. All parish functions were held in the hall.

St. Luke’s Church in Warren Center was a mission church that had been closed and Father McCabe was granted permission by Bishop to dismantle the church and move it to Wyalusing. A group of parishioners and local contractors moved the church to Wyalusing and it was rebuilt at the Route 6 site. The first Mass celebrated at St. Mary of the Assumption was the midnight Mass on Christmas Eve 1953.

An addition of 33 feet was added to St. Mary’s Church and finished in 1981. This was necessary due to the increase in the number of Catholics to our area.

In March 2000, when oil was being delivered to the rectory, the oil tank ruptured and 300 plus gallons ran into the unfinished basement and the fuel oil seeped into the ground. Due to the strong fumes from the fuel oil the rectory was considered unhealthy for the pastor to live in, therefore, was deemed uninhabitable. It became necessary to rent an apartment on Front Street for the pastor to live in. In 2005 St. Mary’s purchased the McCarty home for a new rectory. In 2006 the necessary renovations were made to the McCarty home and the pastor moved to the new rectory. With the six years from the time of the oil spill the fumes had diminished; the process that the recovery crew used with the pipes and pumping the spilled oil from under the old basement was successful; therefore, the old rectory was considered habitable again and it was remodeled and the old rectory became the parish office.

In 2008. due to the shortage of priests and also decline in Mass attendance in the Scranton Diocese, many parishes were linking with one another. In 2008 the Diocese decided to begin the process of linking St. Mary of the Assumption with St. Joachim’s parish in Meshoppen and this linkage became official July 19, 2009. St. Anthony of Padua in Stowell and St. Bonaventure’s in Auburn, mission churches, were officially closed in July, 2009. At that time the new weekend Mass schedule was finalized with one Mass being said at St. Joachim’s and two at St. Mary of the Assumption.

(the following is an excerpt from the inaugural mass on January 30th, 2011) After many months of preparation by the pastor and committees along with the congregation from both churches the two parishes are now being consolidated. Last weekend the Transitional Masses were celebrated at St. Mary of the Assumption in Wyalusing and St. Joachim’s in Meshoppen. Our “New Beginnings Mass” is being celebrated today and we are officially “Our Lady of Perpetual Help.” Future Masses will be celebrated each weekend with a 9:00 a.m. Mass on Sunday in Meshoppen and a Vigil Mass on Saturday in Wyalusing at 5:00 p.m. and 11:00 a.m. on Sunday in Wyalusing.

St. Joachim was the first Catholic Church in Meshoppen. Father P.J. Murphy was the first pastor. The church was begun in 1874 and completed in 1875. Bishop O’Hara officiated at the laying of the cornerstone. The land on which the church stands was purchased from Daniel Sterling and his wife. This same structure stands today providing the people of the Meshoppen area the consolations of the faith. St. Joachim’s Cemetery adjacent to the Overfield Cemetery, about two miles above Meshoppen was purchased from Allen Jayne and his wife, July 20,1893. In 1930, Father Joseph Reilly, pastor at that time, was instructed by the Right Reverend Bishop to find a suitable home which would become the parish rectory. The purchase of the Loomis property was acquired at a price of $6,000.00. With this purchase a large building at the rear of the rectory also became parish property. This building was transformed into the famous Casino, or parish hall. The descendants of the early settlers have gladly welcomed the Polish, Lithuanian, Slavic, Irish, Spanish and Italian families who have moved into the area, thus making St. Joachim’s Parish a truly representative example of a religious democracy. *Post Script: Under the Diocesan Re-Configurations and Implementaition Program “Called To Holiness and Mission,”St. Joachim Parish held its Transitional Mass on Sunday, January 23, 2011 And along with St. Mary of the Assumption Parish in Wyalusing was consolidated into Our Lady of Perpetual Help Parish at a “New Beginnings Mass” celebrated on Sunday January 30th, 2011. St. Joachim’s Church remains an active and vibrant community with Sunday Mass celebrated at 9.am The church is located on Sterling St.

Due to the Covid-19 virus, our traditional Thanksgiving Prayer Services have been canceled this year. But…… GOOD NEWS! Everyone is invited to the Virtual Ecumenical Thanksgiving Prayer Service online in a Zoom Meeting. Our thanks to Pastor Scott Ryan from the United Methodist Church in Meshoppen for inviting us: Website: thecrossandtheflame.weebly.com Facebook: Meshoppen UMC Zoom: …

END_OF_DOCUMENT_TOKEN_TO_BE_REPLACED

O almighty and eternal God,Lord of both the living and the dead,Your tender mercy embraces all men…Through the intercession of the Most Blessed Virgin Mary our Mother, and of all the saints,grant Your merciful pardon to all mothers for whom we pray, whether they still are living in this world or have departed from this …